This year’s overall top trucking industry concerns include truck parking, driver compensation and retention, and for the first time since 2005, insurance costs. It’s also no surprise that top industry concerns for drivers differ from fleet executives.

Among the more than 1,000 truck drivers who responded to the survey, truck parking, driver compensation, and detention issues were their top concerns.

The report details the results of the overall survey of industry stakeholders, including employee drivers and owner-operators, fleet executives, and other trucking industry representatives.

However, each stakeholder group has different perspectives on how these topics impact them. The lack of truck parking, for instance, ranked as the top concern for drivers, but it does not show up on the motor carriers' top 10 list. Conversely, motor carriers are bearing the financial costs of increased insurance premiums and the need for tort reform, which claim the number four and five spots, respectively, on the motor carrier list while they do not appear on the driver list of concerns. 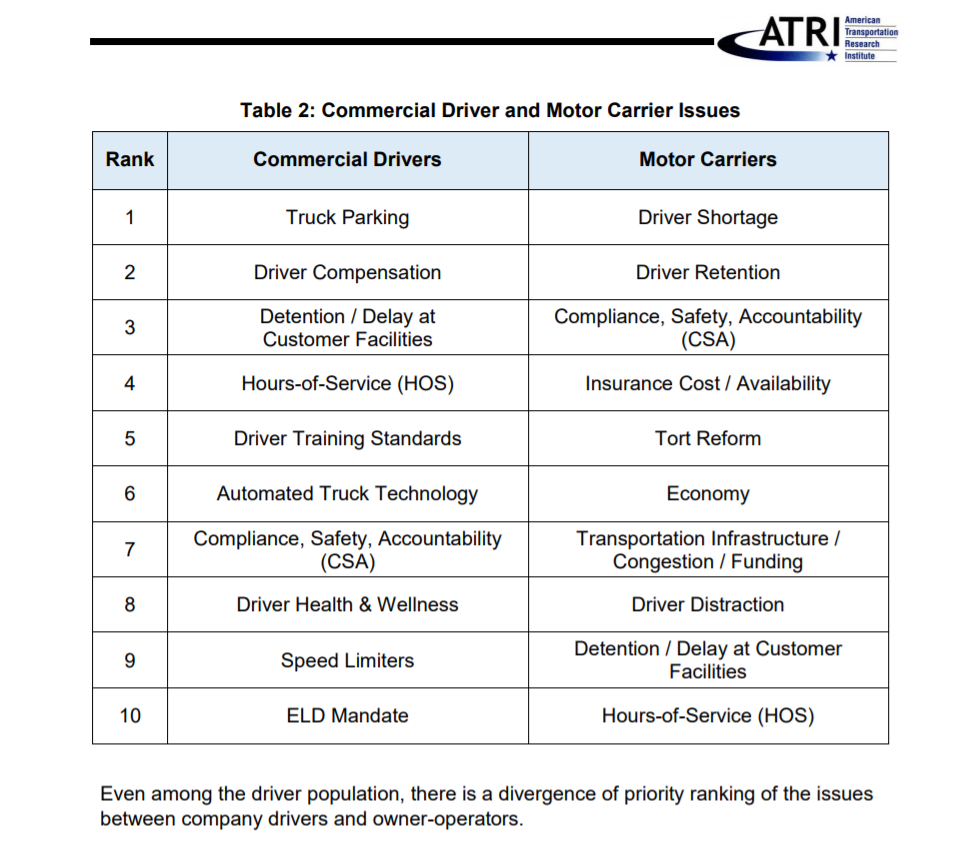 “This is the 16th year of ATRI’s annual Top Industry Issues survey,” said Rebecca Brewster, ATRI president and COO. “This year we had our best response yet, with more than 3,100 respondents. The data set represents about 44% motor carrier, professional drivers were about 32% of the data set, and the rest were other industry stakeholders, including suppliers and law enforcement.”

For the fourth year in a row, the driver shortage was the top industry issue overall, as well as topping the motor carrier list of concerns. The recurring issue highlights the challenges fleets face in recruiting new talent and keeping their current drivers.

Costello explained the problem is compounded by an older demographic of drivers retiring from the industry, and the fact that women comprise only 6% of the driving labor force.

Besides the pandemic, one cause of the driver shortage this year seems to be contributed to FMCSA’s Drug & Alcohol Clearinghouse. Costello pointed out there are 26,000 drivers that have tested positive for drugs and alcohol who aren’t in the return-to-duty process.

“We are down 40% this year in terms of the new people coming in, despite there being over 12.5 million people on unemployment right now,” Costello noted. “Pay will continue to rise, but there is no one silver bullet solution to this issue. It’s not going away; it’s only going to get worse.”

Brewster noted that driver compensation first showed up on the list as an issue in 2019, holding the number-three spot.

As a professional driver, Smith pointed out that driver pay is affected by detention, hours of service, and retention, among other things. Costello added that compensation is a complicated issue that a lot of fleets are trying to figure out. The median pay for commercial truck drivers is $56,000 plus benefits.

“If you have a situation where demand outstrips supply, what happens to price? It goes up,” Costello explained. “Driver pay is no different. What happens, though, is that driver pay rates have gone up at a faster rate than driver take-home pay because of detention.”

Up two spots from number five in 2019, truck parking rounded out the top three industry concerns this year.

“It would probably rank number one as a problem for me,” Smith said. “It’s something I deal with every day that I am on the road. People don’t realize the scope of the problem. Get out on the highways from three o’clock to six o’clock in the morning, and look at the exit ramps and all the trucks parked up and down. The truck stops are full. It’s a safety problem; it’s a huge problem.”

In its COVID-19 research, ATRI found that 44% of survey respondents said truck parking was much harder to find during the pandemic.

Brewster pointed out that CSA is an interesting issue because since it debuted on the survey in 2010, it has since bounced around among the top 10 and top five issues.

“Before we sat down for this panel, we talked about how surprised we were to see CSA ranked as high as it is,” Brewster said. “There have been a number of fixes that have been implemented over the years. We think about the Crash Preventability Determination program and the Item Response Theory model that FMCSA is proposing to implement in its methodology, but in talking to some of the fleets that ranked CSA as their number-one issue, they told me they still have problems with the peer group determinations, and with getting resolution in the Crash Preventability Determination programs, so there are still issues associated with it that led it to be number four.”

Insurance costs and availability is back on ATRI’s list for 2020 for the first time since 2005. This issue is tied closely to tort reform and the increase in nuclear verdicts within the U.S. trucking industry.

ATRI research shows that insurance costs per mile have increased 18% over the past five years, Brewster said.

“There are fleets that are no longer in this business because they cannot afford their insurance premiums,” Costello said. “This was the issue that was really impacting the industry before COVID, and I think it’s still playing out.”

Driver retention held onto its number six ranking from 2019.

“When I started, we stayed on the road for two to three weeks at a time. The generation coming into the industry now doesn’t want to be gone that long,” Smith explained. “We are seeing a lot of the freight change now. Instead of being an average length of haul of 1,000 or 1,200 miles, it’s more like 600 or 700 miles. We are keeping them closer to home. Another thing is the trucking company can probably do a better job in managing their time because sitting at the dock and waiting on a load or due to a breakdown, we are not making money. To retain that driver, you need to keep him moving.”

U.S. Xpress has had driver retention programs in place for the last 30 years now because retention has always been an issue, Fuller said. The carrier has been able to leverage technology to take some of the friction out of the job.

“One of the issues is that the job itself is difficult and the lifestyle is difficult. The more we can do to make things a little more streamlined for the driver on a daily basis goes a long way,” Fuller said. “When we talk to our drivers, some of their biggest frustrations are just the stuff they have to deal with—whether it be paperwork or some of the computer work they have to do. They would rather just drive.”

For the first time since 2011, tort reform is back on ATRI’s list. Earlier this year, ATRI released its nuclear verdicts study, which found a 967% increase in average verdict size between 2010 and 2018.

Larger carriers are seeing a 25 to 30% increase in cost due to the inflation being driven by these verdicts, Fuller noted. However, smaller carriers are getting hit even harder. This is also a major issue that state trucking association executives are dealing with.

“Here we are in a global pandemic. We just saw the steepest, yet shortest recession in history, and [the economy] is only number eight,” Costello emphasized. “I think that speaks volumes for where we are as an industry in the economic cycle right now.”

He explained that trucking is on the “good side of the economy” because of consumer spending and an even greater surge in e-commerce over the course of the pandemic.

“I think it’s going to be a really good peak season and momentum going into next year,” Costello said. “We’re buying more goods and that helps all of you hauling the freight, driving, and making deliveries. I think it will continue into 2021.”

In 2019, driver detention and delays at shipper facilities ranked number six and has since dropped three spots. “This has been a different year given the pandemic, and in some of ATRI’s COVID-19 research, we asked drivers what their experience with detention had been during the pandemic,” Brewster said. “We had about 34% of the respondents to that particular survey say that detention was worse during the pandemic. So, it surprised me a little bit to see it drop in the annual ranking.”

“At the end of the day, I would rather be running miles because that’s how I make my money,” Smith said. “Detention pay is a factor for driver pay, and it also affects retention and driver turnover. Drivers get frustrated when they are sitting and spending a lot of time at these warehouses waiting to load and unload. It can also contribute to the driver shortage.”

Driver HOS rules experienced the largest drop of any of the issue on ATRI’s survey. Last year, it ranked number two, and this year it rounds out the top 10.

“In the full report, we describe how we believe the impetus of this big drop is because many of the concerns the industry had with the hours of service rules had been addressed through this latest rule, which introduced additional flexibility,” Brewster said.